CBC:
A 28-year-old Canadian volunteering as a medic during the Russian invasion of Ukraine has died, according to his father.

Grygorii Tsekhmistrenko was from Ukraine, but was a Canadian citizen. He lived in Kinistino, Sask., for years with his parents before moving to Port Alice, B.C., on Vancouver Island, his father, Vitalii Tsekhmistrenko, told CBC News from Kyiv.

"He wanted to build a house on the water after the war," his father said.

Deaths reported after Dnipro apartment attack as Russia launches missiles across Ukraine
Inside the 'meat grinder': Russian and Ukrainian losses mount in Bakhmut
Tsekhmistrenko, known as Greg to friends, died some time between the night of Jan. 14 and the early hours of Jan. 15 in Bakhmut, according to a volunteer soldier who spent time with Tsekhmistrenko during the war.

The soldier said he's now on his way to Kyiv for Tsekhmistrenko's funeral.

Global Affairs Canada said Tuesday they were "aware of the death of a Canadian citizen". The statement said Global Affairs is in contact with local authorities and the family and are providing consular services.

Vitalii Tsekhmistrenko said he and his wife had travelled to Kyiv from Canada to spend Christmas with their son. They were all together for the holidays.

Tsekhmistrenko's father said he came to Ukraine in January 2022 as hints of war started to show in the news. When Russia invaded Ukraine, he became a volunteer medic.

Volunteer medic was 'full of life'
Through tears, Lusa Tshibangu told CBC News she and Tsekhmistrenko celebrated their friendship anniversary every year on Dec. 3. The two met at a church camp in Indiana in 2013, but really got close in 2018, she said.


"We first started out with candles and then cupcakes," she said from her home in Fort Worth, Texas. "But this year, because of the war…" she trailed off.

The two weren't able to celebrate, but she said Tsekhmistrenko never forgot. "He kept reminding me every single day before, saying, 'Don't forget our friend-iversary.' "

2nd Canadian to die fighting in Ukraine repatriated by family, not Ottawa
She said Tsekhmistrenko told her he was already thinking of going to help Ukraine's efforts against Russia back in the summer of 2021 and that she tried to talk him out of it.


"It is his country, and so he knew from the get-go — no matter what happened — he would go and fight for Ukraine."

After he left, she said she texted him all the time.


"He would always send me voice notes just to make sure that I knew he was OK."

Tshibangu said a friend shared an Instagram post on Sunday with the news that Tsekhmistrenko had died.


"I sent him a text earlier, just hoping that it would go through,"

she said, noting that she had been waiting to see if a second checkmark would appear on her WhatsApp text to indicate that Tsekhmistrenko had read her message.
"But it hasn't."

A man smiles, crouched in an alleyway. He's partially lying down, holding a gun and wearing a helmet.
Tsekhmistrenko was from Ukraine, but was a Canadian citizen and lived on Vancouver Island. His family said he went back to help his home country's efforts against Russia in January 2022. (Supplied by Lusa Tshibangu)
Tshibangu said Tsekhmistrenko was "so full of life," and that he loved to travel and learn about new cultures.

She said he bought her a decal for her car. "It's Calvin & Hobbes dancing and there's a quote: Dance, even if you have to warn people to get out of the way."

She said she's happy she'll have his memory with her wherever she goes. 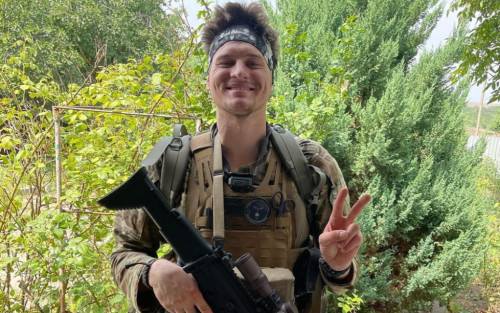 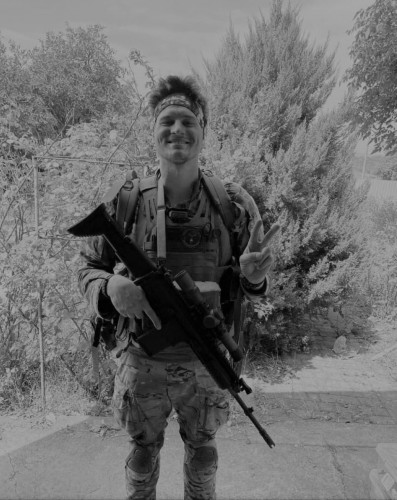 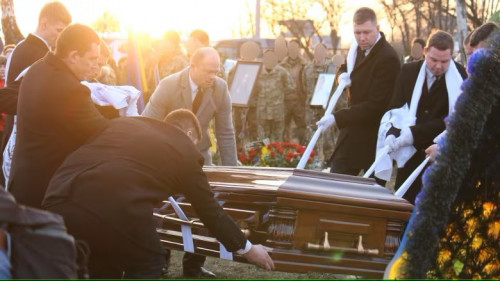